A Comparison of Dedolight to Lowel and Arri Lights

Have you ever experienced the awesomeness of a Dedolight in real life? If not, this might be the video that finally gets you to drive out to your local dealer and try one!

Mitch Gross at Abel Cine Tech put together this terrific short demo showing the difference between Lowel, Arri, and Dedotec light heads of similar wattage. Mitch explains what to look for when sizing up a lamp; beyond brightness, it’s also important to consider the light’s evenness, precision, falloff, and other considerations that don’t always show up on spec sheets (but will impact your day-to-day usage tremendously.)

The American Flag Under a Clear Blue Sky 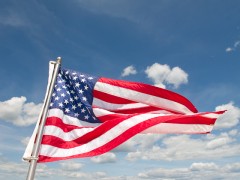 It may be one of the most common photographic clichés, but who doesn’t like a good picture of the American flag in a strong breeze?

I spent most of this past Sunday on the waters of Long Island Sound, helping a good friend move his boat from its winter storage site to where it will spend the next few months here in southwestern Connecticut. The weather could not have been better – lots of sun under a perfect sky, favorable tide, moderate winds,  and not-too-choppy seas. We were on the water for about four hours, and I had (as usual) my Canon G11 with me. It was in the last hour of our trip that I was inspired to make this image, and I’m sharing it with you here. Actually, we were bouncing around quite a bit, and trying to get the flag just right without showing anything but the flag and sky took a fair number of tries (about 50, if you must know.)

The picture was shot in RAW at ISO 80, using shutter-priority (1/800th) and about a stop of under-exposure; producing a file size of 10 MB. As you know from previous posts, I’m a big fan of the Canon G-series cameras, and while I’m always looking carefully at ‘what’s next,’ I think the image is exactly what I was going for.

Unless you’re independently wealthy, at some point you’ve probably felt a little discouraged over the cost of a great lens. But have you really thought about all the time and effort that goes into making one? Take a look at these three videos to learn what goes into a Canon 500mm f/4L prime lens. It won’t make it any easier to afford, but it might take some of the sting away.