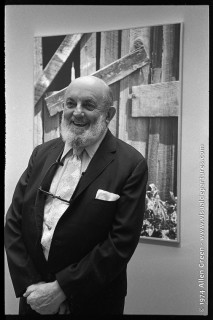 The only time I met Ansel Adams was in 1974, at the opening of his retrospective show at the Metropolitan Museum of Art in New York. I was there to photograph him for the late (and lamented) Saturday Review, a magazine for which I shot many covers and inside stories. I don’t think we spent more than 10 minutes together while I made this picture, and I wish I could remember more about that moment other than his graciousness while I needed “just one more.”

Of course, I was as surprised as anyone when I first saw and heard the story of the collection of Ansel Adams glass plate negatives bought 10 years ago at a garage sale in California for $45. If you’ve seen the story, you know that some experts have put the value of these photographs at as much as $200 million (factoring in all the print and publishing sales that could take place over a period of many decades).

It may not be that simple. Already, Adams’ grandson has said he’s skeptical about the authenticity of the images, and the director of the Ansel Adams Publishing Rights Trust has called the attribution to Adams an “unfortunate fraud.” But according to CNN, a number of experts in various fields have concluded that the 65 plates are indeed the work of Adams, dating from 1919 to the early 1930s. The images are mostly scenes of Yosemite, California, where Adams did much of his best-known work.

Shifting gears, so to speak — back in 1965 I was just out of the army and found a truly wonderful brownstone apartment on the Upper East Side of Manhattan, on a street so quiet and safe that I could leave my Alfa Romeo convertible (top down) out front with no worries at all. My neighbor, Martin Gordon, had recently opened an art gallery in New York, and he was selling a number of vintage prints by Adams. In those days, the going price was $350, so buying one was well out of my league (by comparison, my rent in that great apartment was $200 a month.) But I had previously bought, from the Leo Castelli Gallery, a signed and numbered print by someone named Roy Lichtenstein for $5 — but that’s another story…

In my last post, I wrote about the 1973 Watergate hearings that ultimately led to Richard Nixon’s resignation, in August 1974. My intention had been to wait until this year’s anniversary of the resignation to continue the story. Then I came across  a series of 4×5 negatives from April 30, 1973 that add a bit of dimension to the story. On that date, in prime time, Nixon addressed the nation in his first televised speech on the subject of Watergate.

Trying to come up with a picture that would capture both the importance of the event and to connect it with the President’s use of television, I decided to make the photos directly from the television set. Remember, in those days there were no VCRs, no TiVo, no way (at least at home) to capture an image from television except to photograph the screen, at a shutter speed slow enough to record the full set of scanning lines at a moment without subject movement. I chose  the 4×5 format, shooting 8 sheets of film, to preserve detail and because a leaf shutter would avoid the problems that happen when you try to photograph a television screen with a focal-plane shutter. 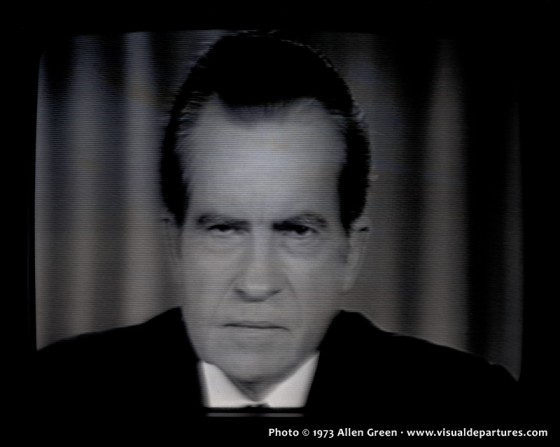 Anyway, the image was a success, and it ran big in a subsequent editorial section of The New York Times. But the speech itself was of huge importance — Nixon announced the resignations of his top aides, Bob Haldeman and John Erlichman, as well as those of the Attorney General and the White House Counsel, John Dean. In the speech, he noted that there were 1,361 days remaining in the second term of his presidency, which he wanted “to be the best days in America’s history.” As it turned out, he didn’t have that that many left as president, and they weren’t the best in the nation’s history.

The speech itself is great reading — he speaks of being “shocked” and “appalled” to learn of the Watergate affair, of being determined “to get to the bottom of the matter, and that the truth should be fully brought out—no matter who was involved.” At various points, the President refers to ‘improper activities’ and ‘shady tactics.’ In fact what’s most interesting in reading the full text of this speech is how easily so much of it could be transposed to other addresses of the presidents, from both parties, who have succeeded Richard Nixon.

Less than a month later, the Senate Watergate hearings began. And as I began to write this, word came that Daniel Schorr, the great CBS News correspondent (and a senior political analyst for NPR for the last 25 years) has died at 93. Besides being one of the original Murrow Boys (in the greatest era of broadcast news), Dan Schorr earned a place on Nixon’s famous “enemies list” for his political reporting.  That list grew from a 1971 memo written by John Dean, addressing “the matter of how we can maximize the fact of our incumbency in dealing with persons known to be active in their opposition to our Administration; stated a bit more bluntly—how we can use the available federal machinery to screw our political enemies.”

Photos from the Watergate Hearings

The latest excursion into my photo archives took me back 37 years, to the Senate Watergate hearings in the spring and summer of 1973. And from there, to the botched break-in the year before at the Democratic National Committee’s headquarters in the Watergate complex in Washington, eventually leading to the resignation of Richard Nixon in August 1974. 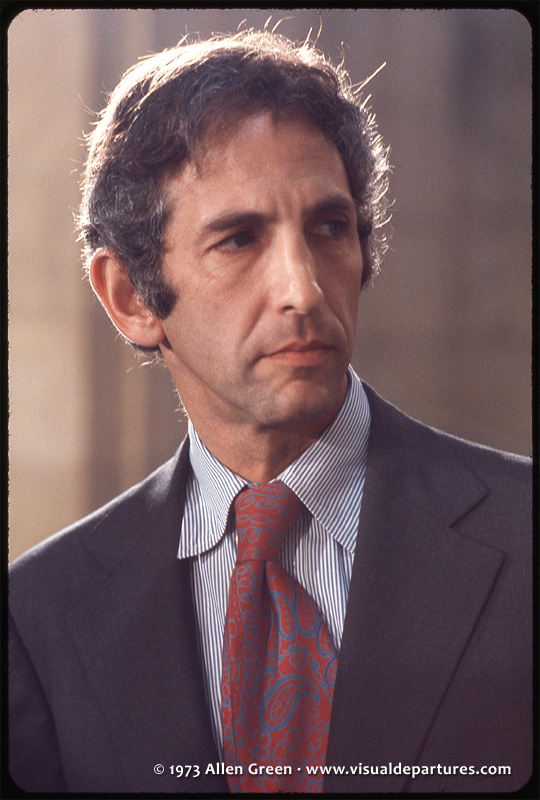 In many ways, the story really began in June 1971, with a former Marine officer and Vietnam veteran named Daniel Ellsberg. Ellsberg, working as an analyst with the RAND Corporation, had access to classified military documents and leaked what became known as the Pentagon Papers to Neil Sheehan of The New York Times (and a number of other newspapers.) Those documents disclosed much about Vietnam War strategy during the Kennedy, Johnson, and Nixon administrations. Simply put, the thousands of pages that comprised the Pentagon Papers showed top officials’ belief that the war could not be won and that casualties would be far higher than ever publicly speculated. Ellsberg’s actions caused Nixon and his top aides to establish a secret group, known as the “White House Plumbers” (since they would stop leaks), who used both legal and illegal methods to investigate Ellsberg and anyone he worked with. 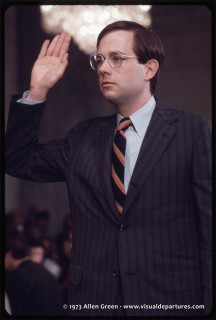 Nixon’s well-known insecurity (you may recall his famous ‘enemies list’) combined with the eagerness of his top aides to fan the flames of his paranoia. So as Nixon’s “Committee to Re-Elect the President” (known by its unfortunate acronym CREEP), took on the 1972 campaign, the Plumbers went to work again. After the break-in at the DNC’s offices was revealed to be far more than a ‘third-rate burglary,’ Bob Woodward and Carl Bernstein of The Washington Post were off and running with the story that would end with Nixon’s resignation.

The Watergate hearings began on May 17, 1973, and one of the earliest witnesses was Robert Odle, 29, who was CREEP’s personnel director. As photo assignments go, this was not difficult work. The Senate Caucus Room was lit for national television; photographers were not ducking for cover; the off-mike huddles of senators and staff made for riveting pictures. Sen. Sam Ervin (D-NC), chaired the committee and was a great subject, as was the Vice-Chairman, Howard Baker (R-TN), who famously asked during the hearings, “What did the President know, and when did he know it?” Here’s Baker (l.), Ervin in the middle, and the committee’s Chief Counsel, Samuel Dash (r.) during one of their many huddles. 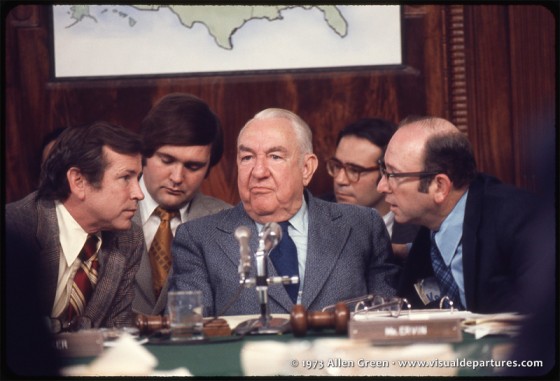 But if you had any sense of where this might lead, coupled with a strong interest in national politics, that summer, Washington was definitely the place to be. On a personal note, I spent so much time in Washington that summer that my three-and-a-half year old daughter saw far more of me on television (in the wide shots of the hearing) than she did in person.

So when I watch current hearings in Washington, whether about the conduct of the Iraq and Afghanistan wars, or the banking crisis, or the disaster in the Gulf of Mexico, I think back to 1973 and the competition to produce better images, different images than everyone else. Some things never change, but most important for me, it was the chance to bear witness to history. In August 1974, the Watergate story came to an end… but I’ll leave that to an upcoming post. 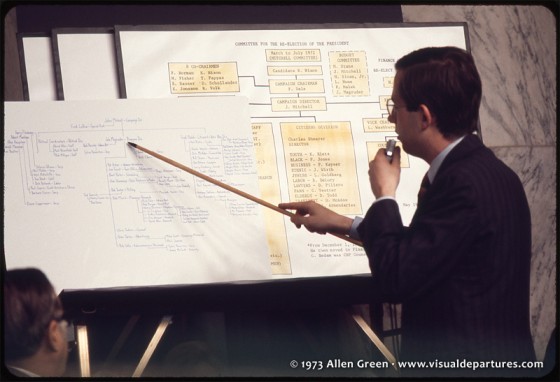