A Chance Meeting with Ross Kauffman (‘Born Into Brothels’, 2004) 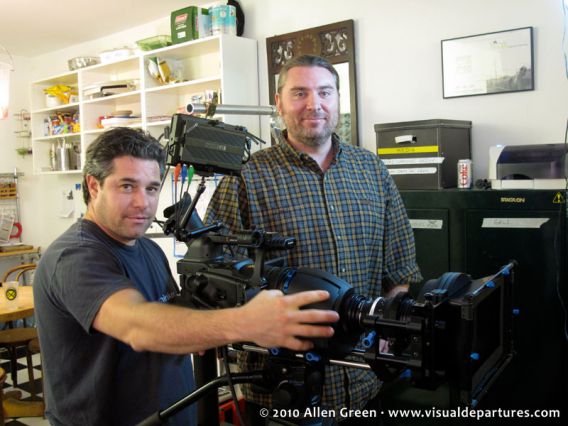 A couple of weeks ago, I was in New York City to visit one of our newest dealers, Production Junction. Its owner, Chris Edwards, describes the company as a ’boutique rental house’ operated by experienced film and video shooters. They’re right — that’s a perfect way to put it, and you should put them in your contact list. Just off First Avenue in the  East Village (and about a 7-iron from Momofuku and other great restaurants), PJ is a prime example of the kind of small but expert companies that independent filmmakers can turn to for every item they’ll need in a production package, as well as for help in securing the permits needed for filming in urban locations.

By chance, during my visit with Chris and his team, I also met Ross Kauffman, whose film Born Into Brothels won the Academy Award® for Best Documentary a few years ago, along with a long list of other prizes. Ross was finalizing his equipment package for a trip to Africa later in the week to shoot a group of short films on education.

Since they’re so light[weight], I always try to have a Rosco LitePad or two with me in my shoulder bag; after Ross told me about his lighting needs on location, I showed the LitePads to him. On seeing the accessory dimmers and AA-battery packs that can power LitePad for hours where there isn’t any plug-in power, he immediately realized that they would be essential for his shoot. So, with a phone call back to our offices in Connecticut, the LitePads and accessories were on their way to Production Junction later in the day.

One of the things I like best about running Visual Departures is meeting other shooters (in all media), learning about their needs and experiences, and being able to introduce them to the tools and resources (not necessarily our own) that will be of real help in the studio and on location. Because we have dealers like Production Junction all over the country, just send us an email if you think we can help solve a problem for you.