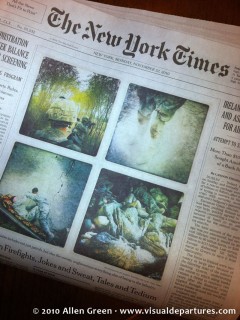 The New York Times is at our doorstep before the sun rises, particularly at this time of year, and a quick look at the front page told me that something very interesting is unfolding in the area of major newspaper photojournalism. Four photos from Afghanistan (there are six more on the inside ‘jump’), credited to staffer Damon Winter, looked nothing like images from the Nikon/Canon realm of equipment.

There is no mention in the captions, or in the long piece they accompany (about a unit of U.S. forces in that country)  that provide a clue. But a quick trip to the paper’s photo blog gave the answer: Following the lead of the troops who routinely use their cell phone cameras to record life in a war zone, Damon Winter has taken his iPhone and, with the Hipstamatic app, produced a series of vignettes (with more to be seen on the web). At the same time, he’s using his Canon EOS 5D Mk II to shoot video for the paper (as well as, presumably, still photos). In any case, his coverage on the web is very impressive.

That got me in a back-to-the-future mode. Just this past weekend, the Wall Street Journal did a piece on the latest generation of cameras (think Sony/Samsung/Panasonic/Olympus) that provide a nearly professional bridge between point-and-shoot and SLR equipment. The essence of the WSJ article is that the SLRs are too bulky and too complicated for the average user to truly master. I know this is true – even my Canon G11 and Nikon D300 have features and capabilities that I can’t begin to remember. That’s why I keep a Nikon F (from 1967) and a Kodak Hawkeye (from the early ’50s) on my desk, just as reminders of how simple things used to be. 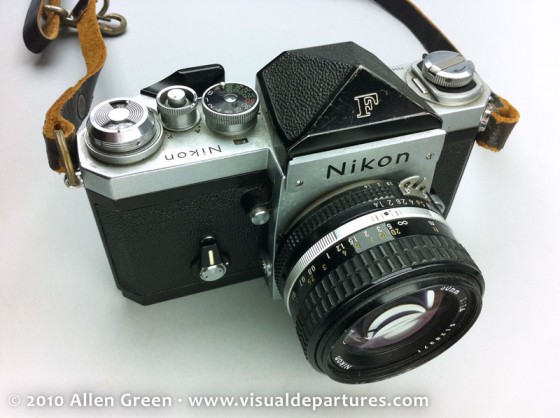 I’ve got nothing at all against technology; after all, I’ve built a company that provides equipment (some of it quite sophisticated) to photographers and filmmakers. But not so many years ago, I never had to carry a 200-page manual to take advantage of the features of any of my cameras. I know lots of very smart people who are buying some very expensive digital cameras and never (never!) taking them off the ‘auto’ setting. So it’s easy to understand the appeal of keeping it as simple as using my first Brownie was 60 years ago. 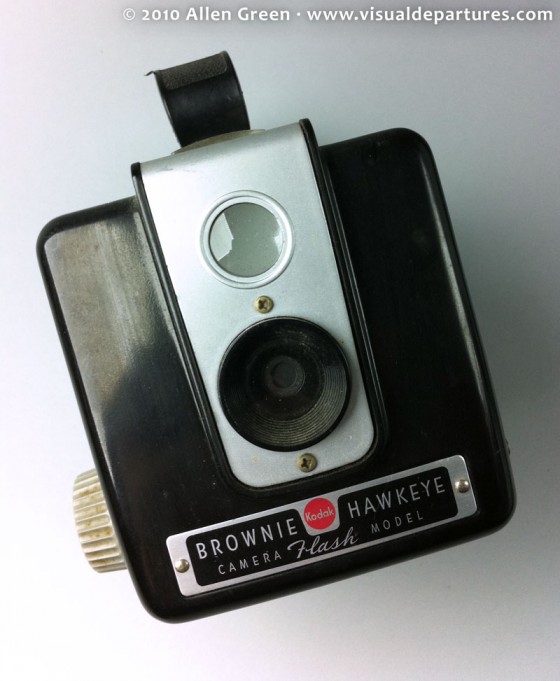 By the way, in a nod to recursion, the photo of today’s NY Times front page was taken with my iPhone 4. 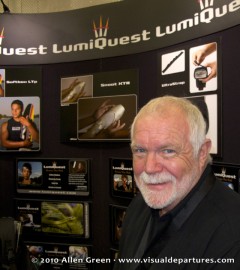 “These are really exciting times for small flash photography.”

So says Quest Couch, a good friend and the co-founder, with Heidi Kenny, of LumiQuest. Based in Texas, LumiQuest has for many years been the leader in accessories for small flash units. They have always been committed to “products that work, rather than gimmicks that sell.” Maybe that’s why Quest and I have always gotten along so well; here at Visual Departures, that’s our mission, too.

Quest and I spent some time watching Joe McNally do a live demo at the Nikon booth to a standing-room-only crowd; like many shooters, Joe makes the LumiQuest products a key part of his location lighting equipment package. Quest has done a number of short and very instructive videos on LumiQuest’s website. No matter how long you have been shooting, spend some time on their site — you’ll learn a lot in a short time. Joe McNally’s blog should be in your bookmarks as well, as he explains the nuts and bolts of his masterful photos.