President Obama Returns to Martha’s Vineyard, and I Check My ‘Priorities’

Two days ago, the President returned to a Martha’s Vineyard golf course very near our home, so I had the chance (away from the rest of the press) to make a new image of Mr. Obama at play. After the expected full inspection by the Secret Service ahead of the President’s arrival, there was  a wait of about 15 minutes while he played the previous hole.

There are things you can control, and particularly with the President of the U.S., even more things you can’t. Instead of playing to the 8th green where I was, the President and his foursome skipped the hole and went straight to the adjacent 9th tee, after driving his cart over to say hello. He was friendly enough in his greeting,  but said he was running late (if you’re the President, I guess you can play the just holes you want). 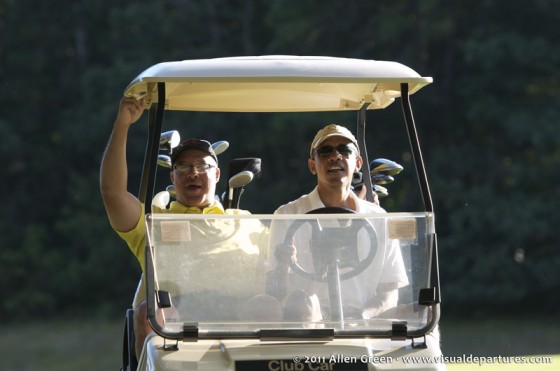 I had already mounted the latest version of Nikon’s tack-sharp and very fine 70-200mm f/2.8ED on my D300, figuring that would cover his short game and putting. And here comes today’s photo lesson —

What shooting mode to use? First of all, there was plenty of light, even though the subject matter was largely back-lit. I wanted a bit of depth-of-field, but since the picture was all about Mr. Obama, what’s far more important was a fast shutter speed. That dictated going to Aperture-Priority set at f/4. With the VR turned on, I ended up with a shutter speed of 1/640, which guaranteed  a sharp image. 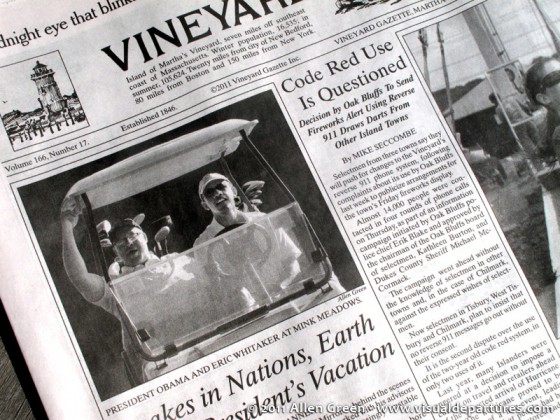 It always makes me crazy that there are so many people who buy a fine camera and great optics, whether an SLR or a point-and-shoot, and then just leave it in AUTO mode. And yet, it’s what I see all the time, even with friends and family — they eagerly seek my advice on what to buy, and then leave in AUTO until they’re ready to buy a new camera. Here’s my point: you definitely will never learn all the options and gimmicks your new camera offers, but please, at least learn how, when, and why to use the various shooting modes.

It was all over in just a few seconds and eight frames (I’m not a fan of high-speed motor drive shooting.) Then, on the 9th tee, he was a good bit farther away, but I took a couple of more shots and caught the President in the midst of the classic Obama fist-bump with one of  his partners. That picture, appearing inside the paper and cropped a bit, was just a bit of pure lucky timing. 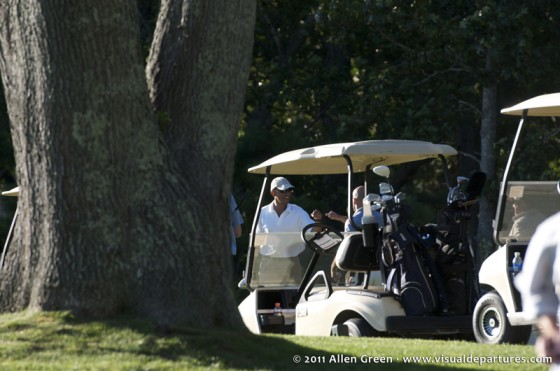 The President leaves the Island this evening, a day early. Now I and the rest of the Gazette staff are turning our full attention to something just as unpredictable as covering Mr. Obama: tracking Hurricane Irene.

I’m in the office in Connecticut this week, and not at our home on Martha’s Vineyard, where my wife and I spend much of the year, even in the winter. For a number of years, I’ve worked part-time for the Vineyard Gazette, a great paper with a history of more than 160 years. Seeing the coverage, both print and television, of President Obama’s vacation on the Vineyard for the third year in a row, I thought I’d share two images from 2009, his first year in office.

Wherever the President travels, the press follows. Being a Vineyard resident was what made possible this front-page photo of Mr. Obama on one of the island’s golf courses. A good friend’s home adjoins one of the greens, so once I knew which course he was playing, it was an easy matter to be waiting for him to arrive. Of course, his Secret Service detail (with lots of equipment) shadowed his play, and I had to have my pockets searched and all my gear checked out. But in the end, it was my picture alone, and that’s always satisfying. 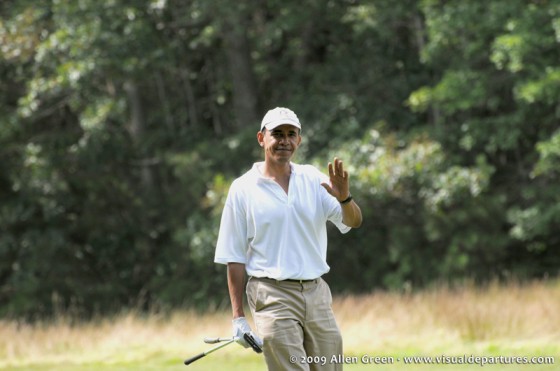 While the accredited press (myself included) operate from a local site set up by the White House press office, in this case the cafeteria of one of the island’s schools, it’s never known when the President may take a break from his vacation to appear for a formal announcement. That was the case almost exactly two years ago, on August 25th, 2009, when Mr. Obama re-appointed Ben Bernanke as Chairman of the Federal Reserve. Besides all the usual photos of the President and Mr. Bernanke, I particularly liked making this one – the staffer with the task of putting the Presidential Seal on the podium, and making sure, absolutely sure, that it is perfectly positioned. He probably has other duties as well. 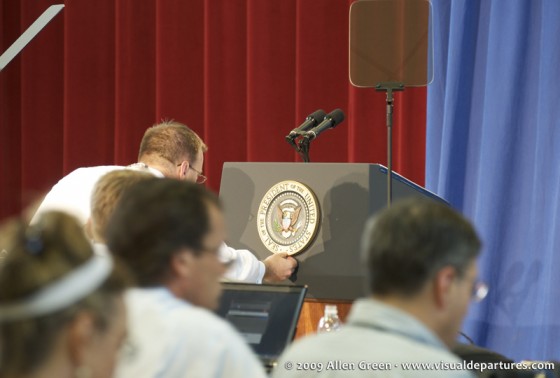 “This Was Air Force One…”

I just learned of the death, earlier this week, of Col. Ralph Albertazzie, who piloted Air Force One during the Nixon administration. That brought to mind the photograph I made at Andrews Air Force Base on August 9, 1974, as the Nixon family boarded Air Force One for the final time. 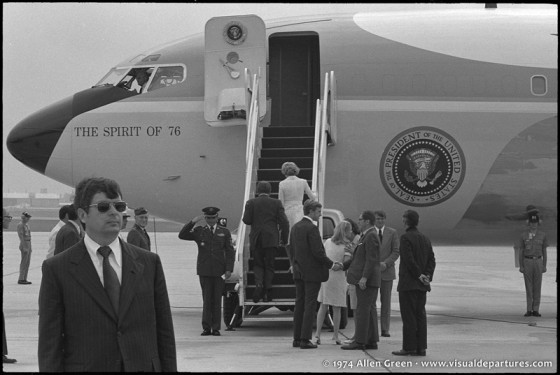 Col. Albertazzie commanded that flight, and the attached obit, quoting from his book, “The Flying White House,” notes the exact time and location when Air Force One changed its call sign to SAM 27000. That was the moment that Gerald Ford was sworn in as President, and Nixon became a private citizen. 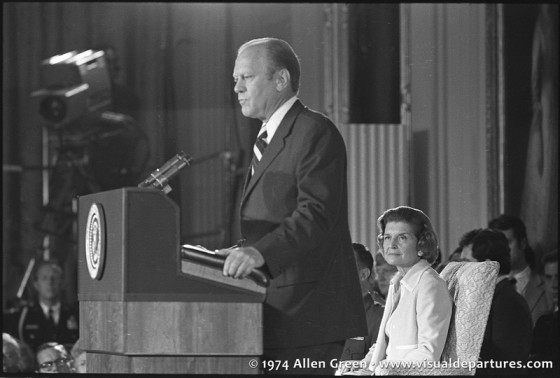 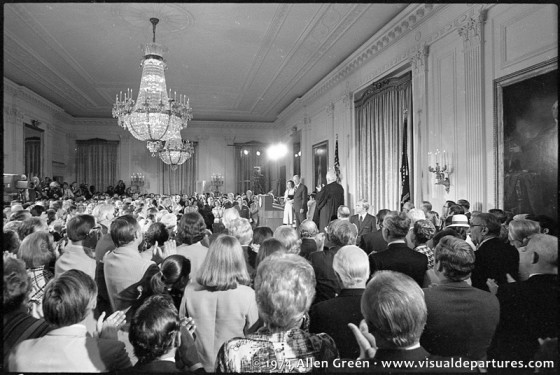 I managed to make it back to the White House in time for the swearing in and later got a look at the Oval Office without any sign of its previous occupant or the new President. 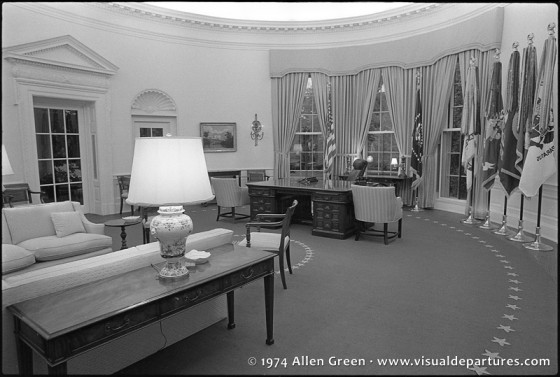