Flexfill… on a Football Field?!

It’s the week leading to the Super Bowl (again – a year goes by so fast), and I thought it would be fun to revisit number XXVIII, between the Cowboys and the Bills, played in Atlanta. A few months earlier, we heard from the NFL with an interesting question – could Visual Departures make a large number of collapsible disks in red, white, and blue. And keep it secret. Our answer was, “Absolutely, yes,” and we got the assignment.

So on January 30, 1994, about 350 young volunteers dressed in matching red, white and blue jump suits came on to the field as Natalie Cole prepared to sing the National Anthem. Their hands were behind their backs, each one holding a collapsed Flexfill. As the anthem began, they dropped to their knees and the Flexfill disks were popped open over their heads to form an American flag covering the area between the two 35-yard lines. With a little hand movement, the ‘flag’ began to ripple for the almost three minutes that Ms. Cole sang. 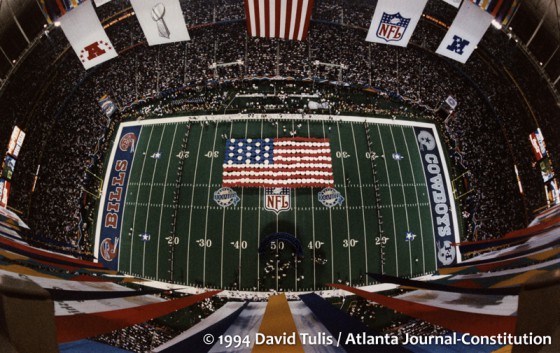 I was lucky enough to have a field pass for the game, and even though I took a number of pictures, the best image of all was made by David Tulis of the Atlanta Journal-Constitution, shooting from high above the playing field. By the way, Buffalo led at halftime, 13-6, but Dallas came back with 24 unanswered points. Final: Cowboys 30-13.