Birding Seems More Popular Than Ever

With the proliferation of DSLR cameras for both still and video imaging, and the instant gratification that comes with shooting digital, it’s easy to see why birding is a growing activity. I’m not big on statistics, but I’ve known for many years that the number of casual and serious birdwatchers in the U.S. alone is in the millions.

Last weekend, my wife and I had dinner with friends who had recently come back from a bird-watching trip to Cuba, arranged through The Connecticut Audubon Society. Of course their trip was not just about birds but also a chance to tour a country somewhat frozen in time. Also in the past few days, the Weekend edition of The Wall Street Journal  ran a great article about a number of field guides for birding. 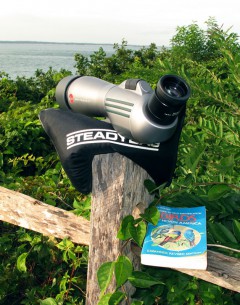 Whether in the backyard or on another continent, a lot more people have the tools in hand in make great photos. Of course, it helps if you can afford a high-speed telephoto lens, but not everyone has a spare $4000+ (though it’s surprising how many do).

Since birders typically use long lenses — whether taking photos or just observing through a spotting scope — it’s important to have a good stabilization platform. We’ve been making our Steadybag® for a long time, and it’s used by thousands of photographers and professional video shooters. It really is a great tool for support both cameras and spotting scopes on any surface —  less bulky and a lot quicker to set up and put away than a tripod.

Click here to learn why Steadybag is better, and buy directly with PayPal.

One more quick tip: most new DSLRs have a lot less noise at higher ISOs than they used to. Don’t get fixated on using a low ISO setting if gaining a faster shutter speed (or the depth of field of one more f-stop) will produce a better image. Birds and other creatures (even your kids) have that terrible habit of not waiting around for everything to be “just right.” 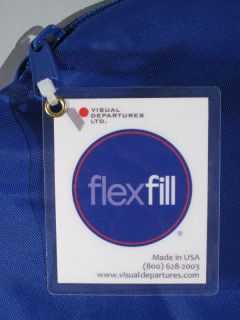 Thirty years ago, we introduced collapsible lighting reflectors to America. Our Flexfill® products, still being made in our own US-based workshop by our own staff, are used by many thousands of still, video, and motion picture photographers all over the world.

But as I found out the hard way, having a great registered trademark for a fine product isn’t enough to keep the knock-off jackals at bay. There are a lot of copies of Flexfill reflectors out there, coming from offshore and produced with varying levels of quality. I’m always pleased when we hear from shooters who have used the same Flexfills for 10 or 20 years.

My good friend of many years, Quest Couch, has had (like me) a long career both as a photographer and as the founder and president of an innovative photographic products company. Many of you know the name LumiQuest, which has been one of the great innovators in accessories for flash photography. Recognizing the increasing and continuing abuse of intellectual property rights which apply to creative work, like photographs, and to physical products, such as those used by photographers every day, Quest has launched a website www.QuestForRights.org and produced a video that you should take about three minutes to watch.

Many years ago, I was asked to submit a portfolio for the annual report of a major international bank. In the initial meeting with the art director and the design firm, I was shown a dummy version of what they were hoping to produce for their client. I recall being asked if I could produce images with a similar look and feel to the sample. At the time, I was more amused than angry because more than half the pictures in the dummy presentation were mine, clipped from other projects I had photographed.

I have always worked hard to protect my rights to the pictures I’ve made over the past 45 years, and yet I know (as do most shooters) that in the digital world, images and text are routinely taken and used without payment or permission. I consider it a point of pride that we continue to manufacture our signature products here in America at a uniformly high level of quality, rather than take shortcuts. So here’s to Quest Couch and his new effort to build awareness and action on saving what many of us work very hard to build.