My Own (Fuji) X-Files

After months of being a very interested observer from the sidelines, a series of events in the past month has turned me into a player. 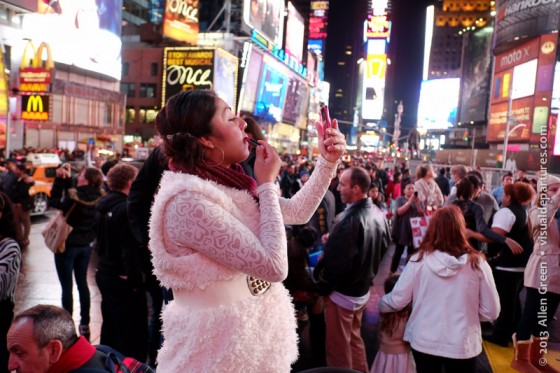 First of all, I’ve been intrigued by all the press, blog posts and reviews revolving around Fuji’s X-Series of cameras, and recent posts here (including Raj’s here and here) will bear that out. But I’m at the point in my life now where I really want to be sure I have some very valid reasons for acquiring any new equipment. And it’s not about the money involved — more a case of recognizing that I have a lot of gear that hasn’t been used for a very long time, and wanting to move that equipment out of my life before adding anything new.

So when I learned from Jeff Hirsch at Foto Care in New York that each year his fine operation plays host to representatives of KEH Camera Brokers, who evaluate and purchase used equipment online (from their base in Atlanta), it seemed the ideal opportunity to accomplish two goals at the same time.

Earlier in December, I emptied my equipment cabinet of a number of non-autofocus Nikon lenses, along with a couple of F3s and  an F100, plus a few accessories that were never going to be used again, made the trip into NYC and left a couple of hours later with the Fuji X-E2, lenses and accessories; including the adapter that will let me mount most of my Leica M-series lenses (the version of my 21mm won’t work — too deep to clear the Fuji’s sensor.)

I’m holding on to a number of Nikon and Leica lenses, since the Nikons perform beautifully with the D800 (especially the 15 / 300 / 500mm), and my ancient Leica 90mm f/4 Elmar may well be a perfect portrait lens (wide open).

So, now, what about the camera and the images — 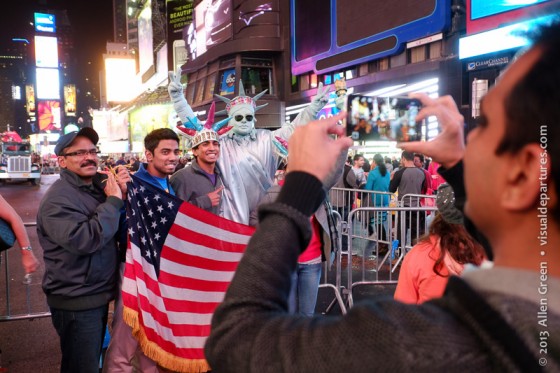 First of all, the X-E2 fits my hands just like I’d hoped (think Leica M-series). Displays make sense and Fuji’s “Q” button is a great way for quick access to various functions. But what about real-world picture taking? Since a prime reason for getting the X-E2 was my need for an unobtrusive “street camera” without spending a not-so-small fortune for the latest Leica M (never an option), I took it out into Times Square the other night, after leaving a private screening of the new Scorsese film, The Wolf of Wall Street. The scene in the streets was about as surreal as much of the film itself. And the weather the weekend before Christmas was approaching 70 degrees, which brought out crowds that would have never been seen there in typical winter conditions. 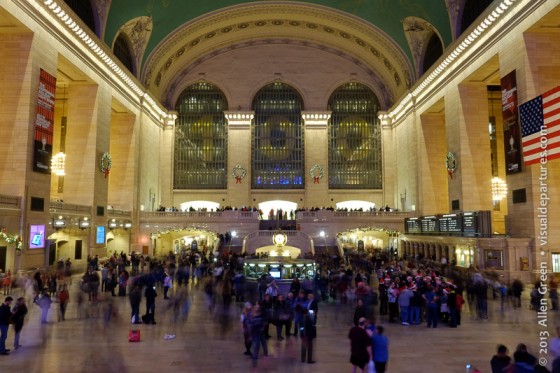 This image of the main hall at Grand Central Terminal, taken from a marble railing, was a 5-second exposure @ f/11 (ISO 200). Two things other than the camera’s inherent excellence made it work so well — the X-E2 has a threaded socket for a standard cable release, and I supported the camera on one of our Steadybag® camera supports – in this case the 8 oz. model SB-3. Yes, it’s our product, but this is not a shameless promo. We make Steadybag in a range of sizes, to support every kind of still and video camera and all their lenses, including the longest telephotos. Sometimes even the smallest Steadybag makes a world of difference in cushioning the front of a super-telephoto optic. 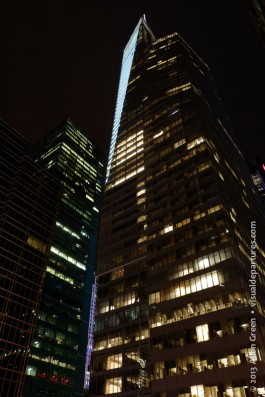 The nighttime image looking up at some of midtown’s taller buildings is a good way to appreciate the importance of a large sensor (as well as the 18mm optics). There is a tremendous dynamic range in this hand-held shot (f/2.8 – ¼”).

And the images in Times Square itself have a tonal range (even in JPEGs) I didn’t think possible. It’s early days for me with this camera, but I think I could travel just about anywhere with only the X-E2; and the whole set of gear would only take up part of a shoulder bag (including plenty of room for my still-wonderful Sony RX100. More impressions to come…

“My X-Trans-Formation”: First Impressions of the Fuji X System from a Canon DSLR User

Once again, here are thoughts from Raj, our Technology Director, on recent changes he’s made to his gear, and in a larger sense, his approach to photography. — AG

So there I was, making the leap to mirrorless after years of lugging various Canons everywhere. 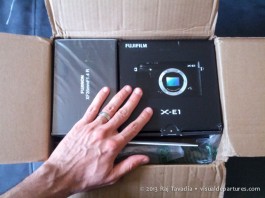 It was a surreal moment when I first held the box containing my new Fuji X-E1. Obviously, I knew the camera would be vastly smaller than my beloved Canon 5D Mark II, but I was still taken aback by the sheer tininess of the thing. And the weight — wow. Things were going to be different.

The second indication that I was living in a different world was, upon connecting my Fujinon 35mm f/1.4 lens to the X-E1, I was prompted by the camera to download and install new lens firmware. Not the sort of thing I’m used to, but I’m not complaining. One of the reasons I took the plunge was the chorus of “Fuji is leading the way in post-purchase support” I’d heard over and over. For example: recently — literally years after releasing the X100 — Fuji posted new firmware for the camera that makes major improvements, even though the X100 is long-replaced by the X100s (which may itself be supplanted next year, if the “X200” rumors are correct). 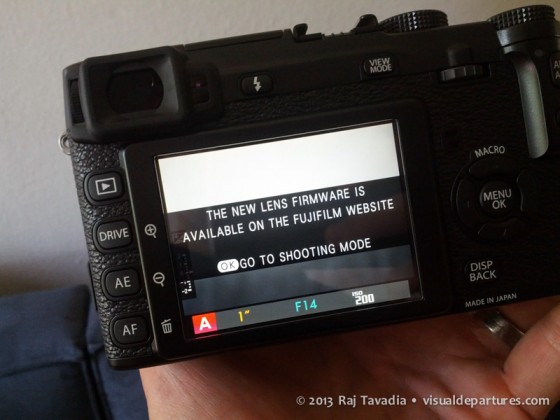 The X-E1’s ergonomics are near-great. The body itself feels solid and confident, being based on the classic Leica rangefinders. The rear screen and electronic viewfinder are slightly laggy, and would benefit from an upgraded CPU (which has recently become available in the form of the just-released X-E2). Compared to the grip on the Canon 5D2, though, the Fuji’s grip area is lacking. Perhaps this was deemed less important as mirrorless bodies and lenses are so much lighter than those of DSLRs, but I believe they fell short here. There are aftermarket grips from Fuji and others, but those come with various caveats. The most egregious mistake comes via Fuji’s own HG-XE1, which feels great in the hand, but — inexcusably! — blocks access to the battery/memory card door. For a camera with fairly dismal battery life, this should never have happened. The Really Right Stuff grip kit comes highly recommended, but at nearly $200, is quite a bit more spendy than I’d like. I’m sure it’s very, very well-made. Just not for me.

Making pictures with the X-E1 feels very different than doing so with the 5D2. I haven’t been a “Green Mode” (a.k.a. “Idiot Mode”) shooter for years, but there is definitely a learning curve associated with this camera. The biggest difference is with autofocus. It is, to be very kind, weak.

The X-E1 uses Contrast Detect Autofocus (CDAF) while high-end DSLRs usually use Phase Detect Autofocus (PDAF). One of the hallmarks of CDAF is that awful period where the lens travels up and down its focal range, attempting to maximize sharpness at some AF point. Usually this period lasts about one second, although it often feels like twenty minutes. To someone dutifully trying to capture the critical moment of cuteness, the CDAF hunt is the bane of his existence. The new X-E2 goes a long way toward solving this, bringing on board the PDAF system from the X100s and thereby a much faster time-to-focus, particularly in low light. While no one is claiming that the X System cameras are suited to sports photographers yet (and their less-well-paid counterparts: parents of small children), there does seem to be hope for the future.

The practical upshot of this situation is that X-E1 and X-Pro1 shooters need to become comfortable with manual and zone focusing. An interesting side note to this is that a significant portion of our community (and it really is one) enjoy taking vintage glass and adapting it to the X System. There are adaptors, at various quality and price points, for hundreds of lenses from Nikon, Canon, Leica, Voigtländer, Olympus, Sony, Yaschica, and others. You’ll usually lose autofocus abilities connecting via these adapters, but if you’re already focusing manually, you’ve effectively lost nothing.

Capture speed is also a weak point. Even with the fastest SanDisk Extreme SD card, I spend entirely too much time glaring at the Card Access light. Yes, I have lost shots thanks to it being impossible to resume shooting once the “buffer flush” begins. I suspect the X-E1’s on-board memory buffer is both smaller and slower than that of the 5D2… which I didn’t expect, given that the Canon is a camera from 2008, and those particular pieces of hardware should be much smaller, cheaper, and faster by now. Of course, this might be a blessing in disguise, as I absolutely used to abuse this ability to play “papa razzi” with my baby. After having edited tens of thousands of almost-identical images taking up hundreds of gigabytes of space, though, I have learned my lesson. Promise.

However! On the whole, my experience has been positive. The lenses in particular have been wonderful. As I mentioned in my previous post, my walkaround lens was the Canon 24-70 f/2.8L (Mark I). Now, I head out with the 35mm (effectively 53mm) and the 18mm (effectively 27mm) Fujinon primes. My standard bag is the Domke J-5XB (loaded with a couple rolls of microGAFFER, of course). But yes, it is quite possible to spend a day out with a couple of lenses (and spare batteries) stuffed into various pockets.

The “weaknesses” of the system have forced me to become a more competent photographer; as in any kind of art, putting constraints on yourself can be invigorating. Back when I used the Canon, I already did “zoom with my feet”; now I have no choice. I was a somewhat-competent manual focuser; now I’m getting better at that, too. I already knew predicting where to stand was a crucial part of action photography; now that discipline is even more top-of-mind. I’m excited and inspired again about the craft, and can’t wait to see what the future holds for me, Fujifilm, and the rest of the industry.