Live News Stand-Ups in the Age of Internet Memes

Used to be if you were doing a live shot during a local or network news broadcast, all you had to worry about was the ‘Hi Mom’ sign being lifted up behind you during your stand-up. But as NBC’s Katy Tur found out on May 27th in San Diego, it’s gotten a bit more risky.

Tur has been the principal reporter covering the Trump campaign for Nightly News, and when it’s a single-camera shoot, there’s no way to cut away from an offensive graphic in the crowd. The best you can hope for is to move your correspondent out of the line of fire and pan back to her in a graphically safer setting. Having directed a lot of live TV news, I can easily visualize the scene in the control room during the nine seconds this was on air on the East Coast. Guaranteed there was a cleaner version for all the other time zones. 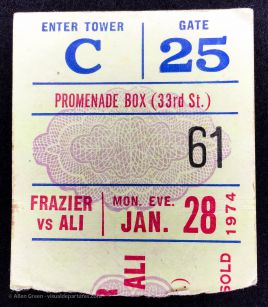 Sports photography was never my strong suit back in the day; I did far better with crime, politics, and the arts.

A few weeks ago, as part of a quiet afternoon at home, I was sorting through a box of memorabilia. Had I not come across this ticket stub for the Ali-Frazier rematch at Madison Square Garden, I don’t think I’d have remembered this assignment.

I grew up in a one-channel town during the early days of television, and if you weren’t of driving age, the Gillette Friday Night Fights was the most excitement you could hope for. So all those years later, the call to be ringside at the Garden myself was a very big deal. 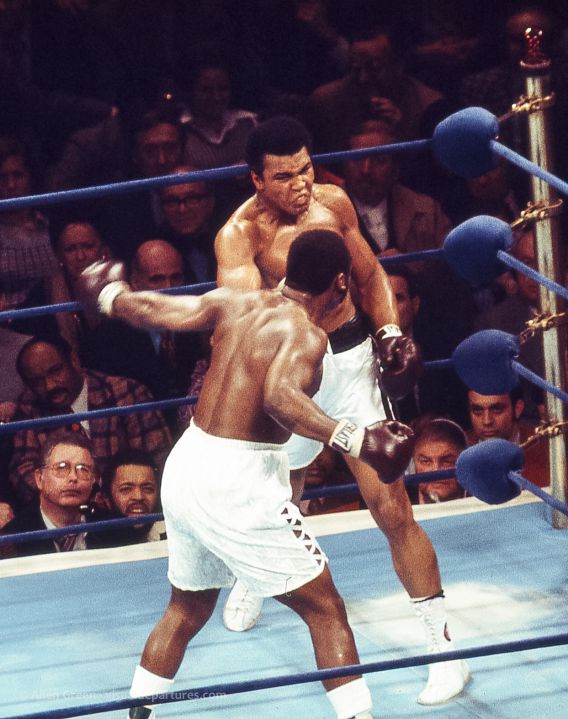 It was the one and only time I ever saw Ali (or Frazier) in action, but given the enormous and well-deserved attention given to his passing a few days ago, I wanted to share an image of what was called Super Fight II. Ali won in a unanimous decision.

Lastly, and not to be missed, this 2014 post at The Guardian collects some of the greatest images of Muhammad Ali.