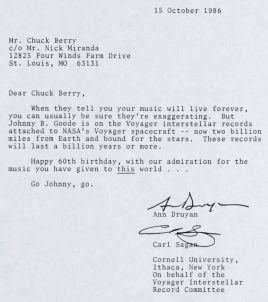 Sad news this weekend, as we all learned that the great Chuck Berry had passed on at the age of 90. His contribution to modern music is such that the entire first page of a Google search for “father of rock and roll” features his name. Or, if you prefer a form of recognition less ephemeral, he was one of the few performers immortalized on the “Golden Record” placed aboard the Voyager 1 spacecraft, now streaking through interstellar space at nearly 11 miles per second. “Go, Johnny, go”, indeed. 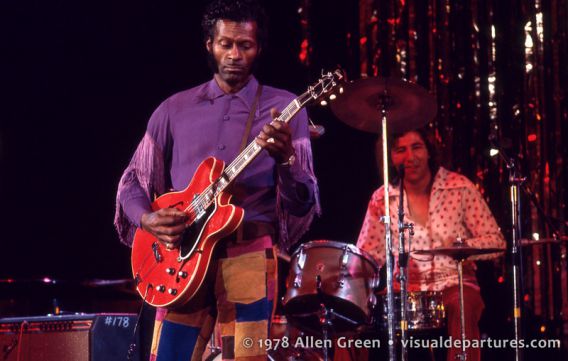 I was lucky enough to photograph Mr. Berry in concert (and fortunate enough to have the images close at hand, considering their age.) The time was November 1972, and the place was Hofstra University, on New York’s Long Island. It was a cool, slightly drizzly night outside, but you wouldn’t know it inside the auditorium, between the warmly-gelled stage lights and the energetic Berry, performing his signature “duck-walk” as he grinned and wailed away on his Gibson. The show was being filmed for ABC’s “In Concert” series, a new venture for the network, directed and executive produced by the legendary Don Kirshner. 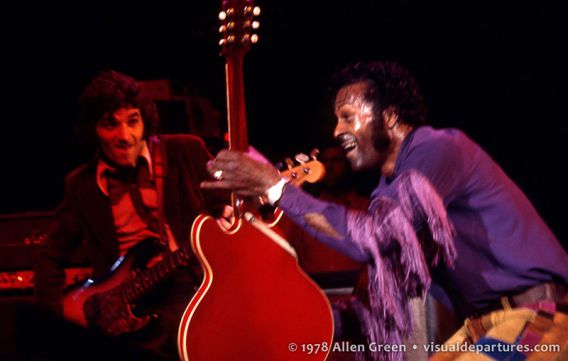 Imagine my delight on finding that highlights from the show are available right here on YouTube. If you watch very carefully (pixels being so much larger and blurrier back then than they are now), you might be able to pick me out standing next to the TV cameras. (I’d much rather you gave your full attention to the music, though.)

And you’ll note that, were you an audiophile who wanted to hear the program in stereo, you were directed to tune your “hi-fi” to the ABC-affiliated FM radio station, which was simulcasting the show across the country. We were all a long way from carrying hi-def televisions in our pockets all day (which also happened to make phone calls and catch Pokémon), but the energy of those live performances was as good as ever – maybe even better.