I’m back from this year’s NAB show in Las Vegas, where it seems the year (if not the decade) of the DSLR continues. Once again, the video production part of the show was filled with cameras (Canon), accessories (Red Rock Micro and Zacuto), and a whole host of established companies anxious to show their track-mounted dollies, jibs, lenses, portable lighting, monitors, tripods and heads, etc. all supporting the EOS 5D and its kin.

We’ll get to equipment in a bit… but first, a word on other diversions. I flew out a couple of days early to meet my son, Tim (a lawyer in San Francisco) for a weekend devoted to food and amusements that are not part of what most people go to Vegas for. Tim is a big fan of Yelp.com when it comes to finding great restaurants, and his research did not disappoint. Since he arrived a few hours before me, Tim had already found (and had lunch at) a Japanese noodle restaurant, Monta, that is an absolute knockout. It has fewer than 30 seats, a short menu revolving around ramen that is the equal of any place in New York or L.A., and prices that are extremely reasonable. It’s located, as so many great places are in Las Vegas, in one of dozens of drab little strip malls that it would be just as easy to drive past.  Another reason to have a portable GPS with you. 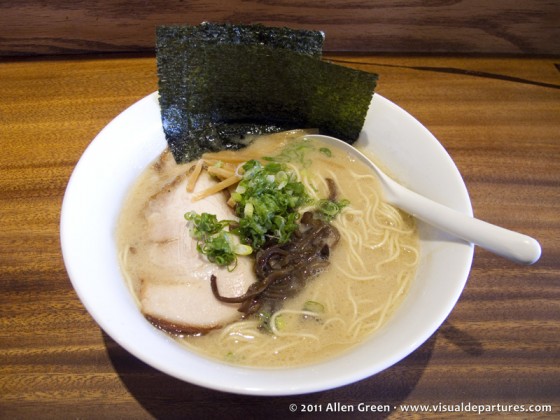 Back to NAB, there are more and more companies each year who are showing and selling LED lighting for studio and location use. But this year, I was very happy to see Dedolight’s new entry into the field, which Dedo himself has named Felloni.

Initially, production will be of the 1×1 size (12″x12″) in a very wide range of output levels and color temperatures, as well as multiple beam angles. There are daylight, tungsten, and bicolor units (variable from daylight to tungsten) — all dimmable, with the ability to be powered by battery as well as line voltage. Great specs on output and power consumption, and some very clever built-in docking of popular battery modules.

We’ll have all the key information on the site shortly, along with PDFs you can download. And if you’re wondering about price, it will be very pleasant surprise. Of course, Dedolight’s current tungsten and HMI lighting range also continues to expand. All the new products are about making sure that film, video, and still shooters have all the lighting tools they need whatever the assignment.

Finally, there is an infrared version of LEDZilla, the very successful on-board LED light introduced a couple of years ago. This one is called iREDZILLA. Primary applications will be for infrared (night) photography and surveillance. Specs indicate it can be used at a range of up to 130′ (based on tests with Sony’s Nightshot camcorder). Considering the popularity of recent online feeds of nesting eagles and other nature videos, I predict strong demand from nature and scientific shooters.

Check back next week for more impressions from this year’s NAB show!